A while ago I silently published a Toggl time tracking desktop app for "project" trackers like myself. I've been loving it ever since so I think it's about time I blog about it here. 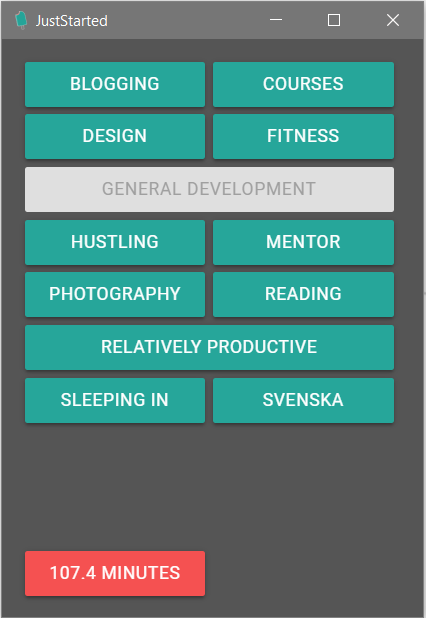 See, time tracking software can be a very nuanced thing, you need one that works for your brain.

It's not that there is anything wrong with the official Toggl desktop app, it's just that it adds extra friction if you track your time based on "projects". It's build to support more demanding users, and rightly so.

For me, my workflow is simple: click a button, do the work.

That's it, two steps. I don't need a third middle step to enter and choose which project I'm working on.

I've been using iOS Shortcuts to start and stop specific Toggl "project" based timers ever since the Shortcuts feature was added to iOS back in 2018.

I've blogged about the exact ones I use here and how you can set that up should you want to. Those posts are a bit dated now, but you'll get the idea.

The Shortcuts interaction on iOS is incredibly efficient; swipe down, swipe right, click the button, done.

This gave me an idea, could I replicate this simple and efficient interface experience on my desktop? Of course I could, I just needed to learn how to use Electron first.

Never one for backing away from a pointless learning challenge I got to work.

Why the choice of Electron? Well it's trendy ever since Slack made it cool, and I thought it would be the easiest way to get my new app built in a cross-platform way.

It took me about two weeks of working on it here-and-there to get it to where it's at now. I released the current (at time of writing) stable version 0.9.2 back in September 2019.

I thought I'd trial it for a bit to see if any bugs come up but, the handful of active users using it haven't found any. Yay for small feature sets.

The app is called JustStarted and you can find the installers on Github. I haven't released the code for this one publicly yet because of reasons.

I can however tell you that I don't store/access any of your personal data, or anything related to your Toggl account. I do send some metrics to Google Analytics to help me see how many people are using it.

Sidebar: The Google Analytics being a part of it might change in the future as I'm not really a fan of the Google Machine™ anymore, I even went so far as to completely remove GA from this blog. That's a story for another day.

Since I don't do many of these apps the packages aren't signed and you get an annoying one-time warning message when installing it. If you got the installer from this Github page, everything should be fine (famous last words). If you know of a free way I can sign the packages please get in touch.

Setup is incredibly simple as I let my UX side run free on this one.

You start the app in the new user journey where all you need to do is paste in your Toggl API key from your Toggl profile settings page and then press the enter key. You'll see the app generate a list of buttons for your projects.